Purists will be delighted to learn that a Nike Air Huarache “Triple Black” is on the way. The celebration of the 30th anniversary of the Huarache is accompanied by numerous reissues, …

The Swoosh skate division is preparing a new pack for us, which will include this Nike SB Blazer Mid “Mosaic Pack” Black. After the release of a “Faded” pack this spring, …

After reading many mixed reviews about the Nike Flight Windmill, I needed to find out for myself whether these shoes were as bad (or as good) as people claim. These beauties … 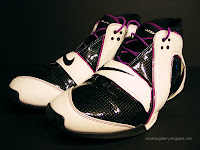 After reading many mixed reviews about the Nike Flight Windmill, I needed to find out for myself whether these shoes were as bad (or as good) as people claim. These beauties have been seen on many of the L’s best swingmen such as Rashard Lewis, Shawn Marion, Andre Iguodala, Andrei Kirilenko, Vince Carter, Rudy Gay, and Jamario Moon to name a few, which would suggest that they’re nothing short of spectacular. I was a big enough fan of the aesthetics of the Windmills to own 4 different colorways before ever setting foot on a court wearing a pair. So what happened when I finally took the floor?

Consumer complaints are aplenty: no ankle support, laces are too short, lace eyelets rip apart from the shoes, velcro strap doesn’t stay on, and the list goes on. When I first put them on, I noticed right away that these don’t have as much cushioning around the top of the foot as most other shoes. They feel kind of like an average And1 shoe, which usually have very thin uppers. I compensated by lacing the shoes very tightly… a mistake that will be realized later in the evening. The laces, in fact, are quite terrible; not only are they much too short, but they are stiff, round laces that are prone to coming loose even when double-knotted. I opted to play in the stock laces, but a quick and easy lace swap will solve this problem.

As I started shooting around, my previous concerns went away as I felt the Zoom Air units in the heel and forefoot cushioning every step and jump. There was some ankle support, but it wasn’t spectacular due to the lack of cushioning in the upper. The shoe’s weight falls in the very light category in the company of shoes like the Huarache 08 and 2K4.

I found the foot lockdown to be quite good during play, as I never noticed any foot slippage. The stiff panels that form a triangle on the sides of the shoe provide a lot of lateral support; the shoes don’t seem to warp much during quick cuts and lateral movements, and I’m sure the black perforated patent leather contributed to this as well. Traction was never a problem with the Windmills during play. For a while, I actually felt that these shoes had become one with my feet, in the way that a Z-rated low-profile tire performs on an 18″ rim. It’s a very quick and nimble shoe. 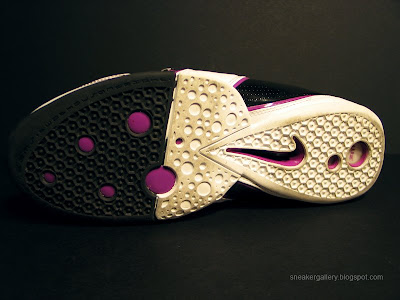 However, after a few games and about 1.5 hours of play, I began noticing some pain in both pinky toes, as if the sides of the shoes were rubbing my feet raw. Sure enough, that was indeed the case; a big chunk skin was missing from each pinky toe. I’m not sure if I laced them up too tightly or if the shoe’s profile is slimmer than average, but I had to switch back to my trusty 2K3’s for the rest of the night. People suggest doubling up on socks whenever this kind of problem presents itself (as I’ve read with the Jordan XX3), but I haven’t had the opportunity to try it. For reference, I always wear Nike quarter socks during testing.

I didn’t experience any problems with the velcro strap and ripping lace eyelets, but consumers seemed to make these complaints after several outings; I was only able to play in these for a couple of hours. Judging by the flimsiness of the straps, cheap velcro that doesn’t have as much “grip” as normal velcro, and eyelets that are merely sewn onto the shoe (instead of holes in the upper), I can definitely see durability becoming a problem in the long run. 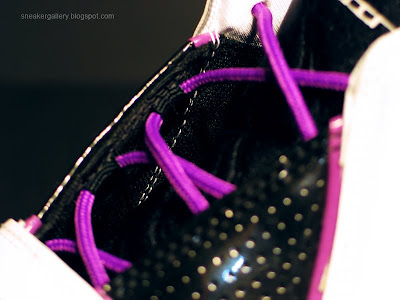 Detail of laces and eyelets 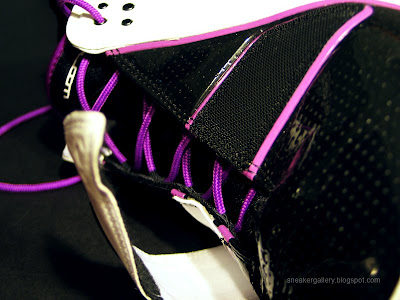 The paper-thin straps are already beginning to warp

The Bottom Line: The Flight Windmill is a terrific looking shoe that immediately turns heads on the basketball court. It comes in great colorways, and the PE versions are simply amazing. There are a few shortcomings such as terrible laces, sub-par cushioning in the upper, and lockdown so good it’ll rub your feet raw, but its great performance makes up for it. Long-term durability is definitely an issue. It’s a good shoe for a quick game (or a dunk contest), but if you’re looking for the one-and-only, play-all-day shoe, you may want to look elsewhere. 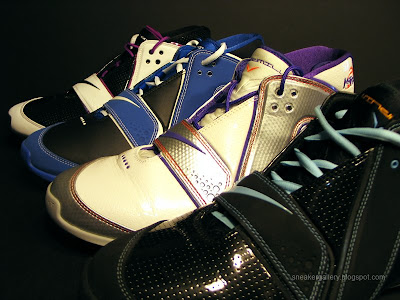 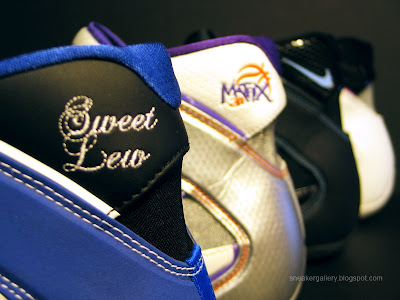 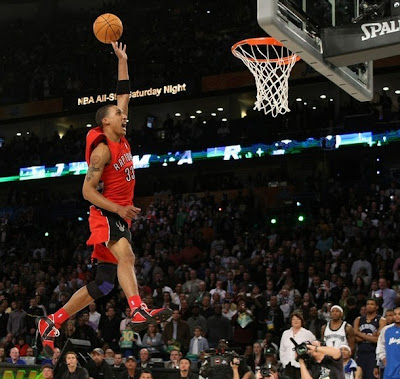 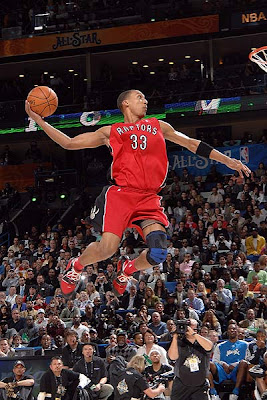 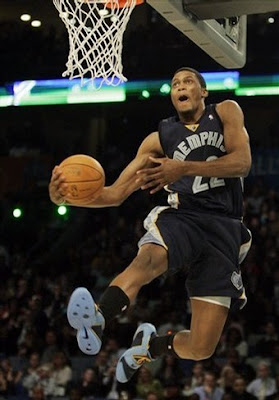 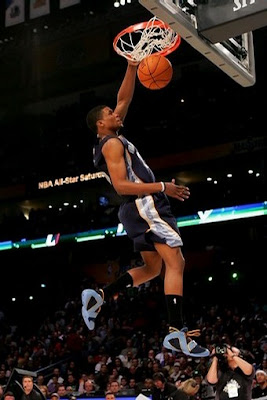 It’s only appropriate that the first post on this blog is about one of the great basketball shoes of all time. I’m not biased in any way; as a connoisseur of … 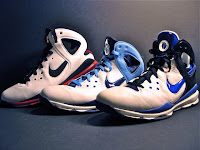 It’s only appropriate that the first post on this blog is about one of the great basketball shoes of all time. I’m not biased in any way; as a connoisseur of basketball shoes, I’ve played in Reebok, Adidas, and Nike, and I can say with confidence that the Huarache line is the most consistent-performing line of ball kicks I’ve ever hooped in.

The Huarache 08 brings a fresh new look from the previous years’ Huarache Elites I and II (unless you were fortunate enough to have your own PE straight from Nike). Along with the drastic aesthetic upgrades come a very familiar performance and feel… Zoom Air in the forefoot and heel provide a very responsive spring in your step, and the flexible midsole and leather upper ensures playability right out of the box. Traction was never a problem during play, and the feathery weight is a delight.

The only gripe is that the 08 model runs a tad bigger than past models, so the foot tends to slide around a bit more than desired. Naturally, I laced the shoes up more tightly, but then found that there was a lot of extra room in the toebox, rendering the shoe a little clumsy on quick cuts. I went with a half-size down on my next pair and found the length to be perfect, but they were slightly too narrow. (By comparison, I wear a 12 in the Huarache 2K4 and it fits perfectly; I would elect to play in an 11.5 in the Huarache 08 and let the laces out a little.)

The Bottom Line: The Huarache 08 is a great basketball shoe that doesn’t fall short of the Huarache line’s standards and expectations. It plays well right out of the box, and if you’ve balled in Huarache’s before, this shoe will feel completely familiar. It comes in terrific colorways, and I find myself wanting to collect them all. Performance-wise, I’d rank the 08 just behind the 2K4, but just ahead of the 2K5. The 2K4 tops my Huarache list with its superior foot lockdown and more nimble forefoot silhouette, and the Zoom Air cushioning of the 08 somehow feels more responsive than that of the 2K5, especially in the forefoot (and the 08 is a more durable shoe).

note: I haven’t tested the Huarache 09 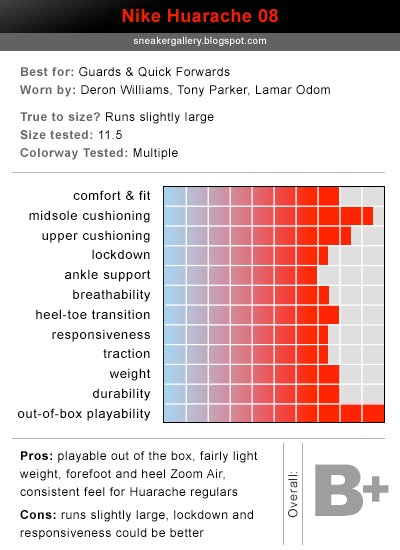 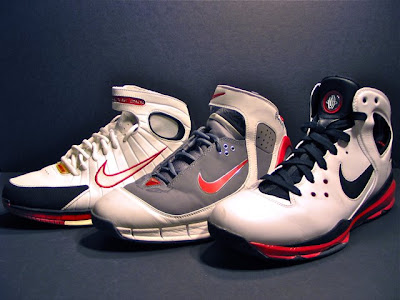 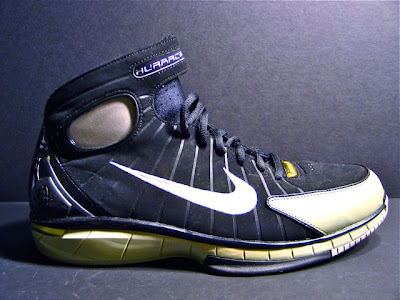 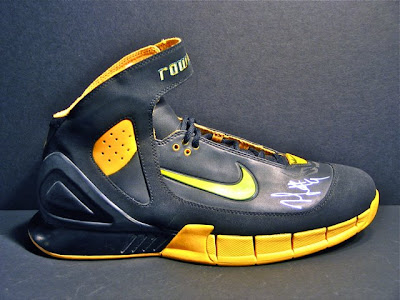 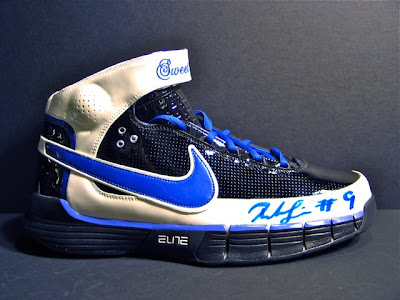 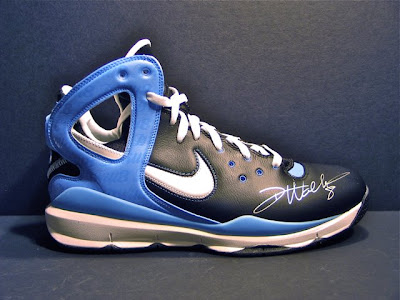